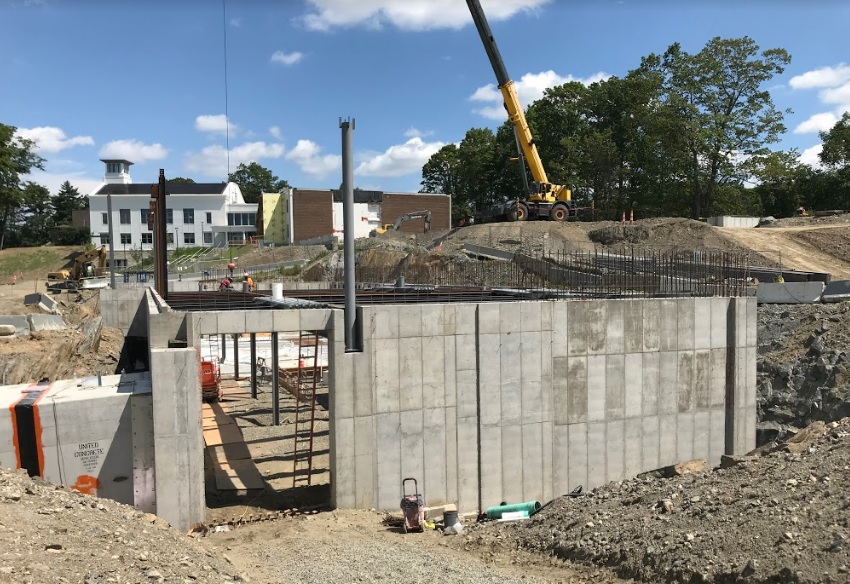 STANWICH ROAD [on location]- The heat is on this summer for the Turner Construction Company workers as they continue to work on the GCDS Upper School building at a steady pace.  Despite the hot weather, all construction at the Stanwich Road campus is on schedule, and all hands are on deck for this project, The Chronicle discovered during a site tour.

Going to school on or near an active construction site will be unusual for most students, so life at the Upper School will be different in some ways.  Some noise from the construction is to be expected, and the spacing might be a little cramped as well given that there are 100-plus new 9th graders and only 12 Seniors graduated.  While the Upper School is fully modern already, there won’t be new additions of spaces or classrooms at school, a fact that will be highlighted due to social distancing mandates.

“Even though the blasting would sometimes give us a good scare and we would often see bulldozers outside our classroom windows, the construction is just what comes from going to a brand new school and the knowledge that the construction will help the campus grow makes it all the more exciting to watch it unfold first hand,” said rising 10th grader, Wylie Dell’Olio.

Some students have already experienced going to school near a construction site- incoming 9th graders include Stanwich School kids who were in 7th grade during heavy work done in 2019- but for new students it may be a bit more foreign.

By fall of 2021 everyone can expect significant changes to the Upper School, including 22 new classrooms, locker rooms, science labs, and other specialty rooms. However, for this coming September, the North Building will stay in place, the front driveway will be paved and new sidewalks will be placed, there is a new exit out of the building, and there will be no more stairs at the end of the South Building, which will eventually connect to the new structure.

“At this moment, the construction is on time or ahead of schedule, which is rare in these cases,” said Mr. Rick Columbo, Assistant Head of Upper School in an email interview. “Although, we will not have the benefits this September, come September 2021, we will truly be a fully functioning.”

The construction has been moving along at a great pace since school closed, but Mr. Bruce Pitman, Construction Coordinator, says that school being closed doesn’t affect the construction schedule at all. He also mentioned that this coming year, students and staff at the Upper School will be hearing some noises from construction as school reopens, similar to last school year, which is to say, nothing overwhelming.

He also updated The Chronicle on the progress.

“We have completed the foundation for the basement level which includes: footing, piers, and foundation wall for the South-West building,” he said in an email and exclusive in-person interview during a tour.  “We started erecting steel for the theater level and have installed the tunnel from the basement to the front field. We are in the process of re-configuring the front driveway to be the stair.  We have installed 75% of the foundation for the Main level of the North-West building.  We have started the installation of plumbing underground for science classrooms. We have completed about 75% for the excavation for the kitchen and loading dock building.”

In just a few months, tremendous progress has been made on campus.

“The two most visible changes are the stairway at the south end of the building has been removed.  It has been replaced with a temporary exit which created a little open area on the first and second floors across from the Breakout areas.  The second change you will notice is that to accommodate for the new stairways, two classrooms have been reduced in size.  These are the last classrooms on the south side of the building,” Mr. Columbo said.

The Turner Construction Company is dedicated to this project and its punctuality.  It is Mr. Pitman’s 8th project as a lead, and workers spend around eight hours on site each day, for the Upper School to be complete in time.

The work that has been put into making our campus ready for us is significant. Workers spend everyday building and making improvements to the Upper School.

Our school is right on track and will be completed on time, even with the extreme heat this summer.

Carolina Deus is a rising 10th grader who enjoys math and running cross country.  Violet McCann contributed to this story.  This article was written for the summer Journalism Lab practicum.